Tiny: A Story About Living Small 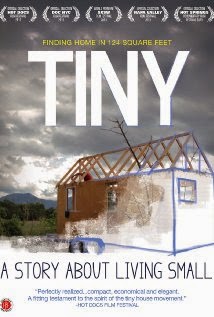 Tiny: A Story About Living Small (2013) is an hour-long documentary about a growing movement in the United States where people choose to live in very small houses - some less than 200 square feet. It features interviews with people building them as well as those who are already living in them, and follows one man through the entire build process.

This is a fascinating subject where it forces you to ask just how much "stuff" do you really need? The economic benefits of this kind of living are pretty obvious: less electricity and water, less insurance, less overhead, and so on. Of course the trade-off is less space. Most of those interviewed were either single or married couples though it did briefly show one family with small children.

I suppose you could compare this type living to staying in a small camper or RV. Most of the houses shown here appear to be in environments where air conditioning is not as needed during the summer. The interior layouts of the homes are neat to see how they maximize space so well. All of the homeowners talk about how their low cost of living affords them more money to travel and buy other things, and I suppose with such a small space you'd want to get away quite often.

If you're interested in small living, you should definitely check this out. Don't bother if you're claustrophobic!