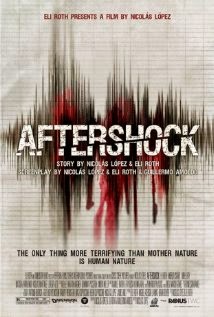 Aftershock (2012) is about some tourists in Chile who endure a horrific earthquake and the human chaos that erupts in the aftermath. It's a very comical horror movie, and not all that good. Eli Roth (the "Jew bear" from Inglorious Bastards) stars alongside several European actors I've never seen before.

This movie runs about 90 minutes, and nothing really happens for the first half hour. All we see are these goofy guys trying to hook up with a bunch of gorgeous South American women at a series of clubs and parties. The dialogue sounds like something you'd overhear teenagers saying at their first party. After the first half hour is over, the earthquake hits, a bunch of people die, and this group goes off running for their lives.

What sort of makes this movie interesting is that the natural disaster isn't the real villain. Instead, it's the roving bands of looters and other miscreants that come out after the quake hits. While this group of people is just trying to get to higher ground and find a safe place, they end up being chased by a bunch of thugs who are taking advantage of the situation to rob and kill people. It doesn't make a lot of sense but results in quite a bit of gore.

In the end, I didn't much care for Aftershock. It tries to be a horror comedy but most of the jokes fall flat and the scary parts are too over the top. Don't waste your time on this obscure title - there's a reason why you've never heard of it.