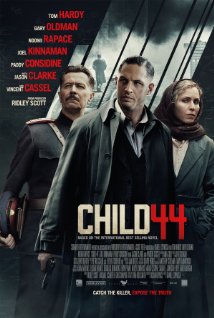 "There is no murder in paradise."

Child 44 is based on the bestselling novel from Tom Rob Smith and the screenplay has supposedly been floating around for years. The movie was put into limited release earlier this year but got overwhelmingly negative reviews and was even banned in Russia for it's bleak portrayal of the Orwellian-like life under communist rule.

The story involves a child murderer who is killing orphans in Russia, and a decorated military veteran (Tom Hardy) who is pursuing him. However, Russia refuses to acknowledge that one of their own may be a killer and to even say so constitutes treason. This means that Hardy's character must go against the state and investigate independently, which brings him all kinds of trouble. When his wife is accused of espionage, the two are forced to go on the run while an old rival hunts them down. Expect quite a few extremely brutal fight scenes as various agents try to kill them both.

I quite liked the movie despite the heavy Russian accents making some dialogue hard to understand. Having previously read the book it was also easier for me to follow since I already knew what was going to happen, so perhaps that made me like the movie more than someone going into it blindly. It's a shame this didn't do better at the box office because the next book in the series is even better. I still think it is worth checking out despite the dark subject matter.