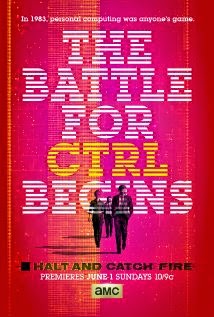 Halt and Catch Fire isn't on Netflix yet, but it probably will be since most of AMC's shows are on there. This debut season just finished up and I was quite enthused by it since the story is based on a computer company in the early 1980's.

Lee Pace stars as a Steve Jobs type who may or may not be a total psychopath. He's manipulative as hell but manages to force greatness from people even if it nearly destroys them. In some scenes, he has a chest full of scars and offers multiple explanations for how they got there while we still don't know the real truth. He's also willing to sleep with men or women to get what he wants. This guy is a mess, and he's leading up a group of techies to build what he considers to be not just the next big thing in computing, but the thing that gets us to the next big thing. He's trying to project that far ahead.

Scoot McNairy plays the Steve Wozniak here who is still trying to get over a previous failure while being coaxed into this wild project by Pace's character. He and his wife dive headfirst into things and it causes problems between them. Meanwhile, a hotshot young programmer (Mackenzie Davis) is adding a little punk rock to the mix with her unique way of doing most everything, including the coding of a brand new operating systems. It both helps and hurts that she's sleeping with the boss. This first season ends with them all at a Comdex computer convention where they get to show off their work alongside everyone from IBM to Apple, then we find out what they've really accomplished.

I do hope that AMC renews Halt and Catch Fire for at least one more season because I would like to see what direction it takes after what all they've done with this first season. I believe the writers get the subject matter well and it's not technically inept at any level while still being understandable to those who weren't around back in those days.

Update: Halt and Catch Fire Season 1 is now streaming on Netflix. The new season starts this summer on AMC! 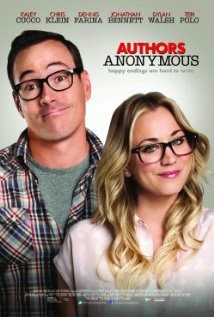 Authors Anonymous (2014) is a mock documentary about a group of writers who find themselves insanely jealous when one of their writing club members lands both a publishing deal and a movie deal. It pokes fun at the publishing industry as well as wannabe authors, and I enjoyed it though some of the jokes hit a little close to home.

What makes this movie watchable is the talent on screen, since the story isn't particularly memorable and it really goes for long stretches without enough funny parts. Kaley Cuoco (of Big Bang Theory) is the lead here and she's who gets the publishing/movie deal even though she's kind of a ditz. Chris Klein plays a fellow writer who may have waited too long to tell her how he really feels. The late Dennis Farina plays a Viet Nam vet who thinks he should be the next Tom Clancy, and he steals every scene he is in. Other actors include Dylan Walsh and Teri Polo, plus a cameo from Jonathan Banks, who is better known as Mike from Breaking Bad. Tricia Hefler (the blonde bombshell from Battlestar Galactica) also has a small role.

I liked this movie because I am a self published author and know exactly how these characters feel. I have also met some people somewhat like the characters here - the ones who want so badly to get published and be famous but would rather talk about it than really put in the work. In some ways, this was kind of a sad film given how the characters acted plus seeing Dennis Farina's last role was bittersweet because he was the liveliest of the bunch. I see this one as having a somewhat limited appeal due to the subject matter, but it's still worth checking out.