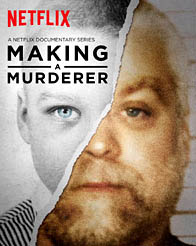 The big thing going around right now is everyone seems to be binge watching Making A Murderer on Netflix. It's a documentary that follows the case of a Wisconsin man named Steven Avery who served 18 years for a rape he supposedly didn't commit, got out of jail and began a lawsuit against the people who put him behind bars, then suddenly found himself in the middle of a murder investigation.

What this documentary sets out to show is that the Avery family were targeted by police officers, evidence was supposedly planted, and confessions were coerced by Avery and another family member, both of which have less than average IQ's. It is all quite compelling, but I did some of my own research on the case as well as talked with some police officers I know, and it turns out the filmmakers left a few big details out of this documentary. In fact, I just read that a Season 2 is in order to cover some of this new material.

Do you think Avery killed the girl? Are they really a family of criminals or just a poor blue collar family being singled out by police?

Also, be sure to check out this additional info from Ranker.com, which includes a lot of left out bits with sourced information. Personally, I think Avery did it but the nephew was coerced.
Posted by Bill F. at 10:24 AM No comments: