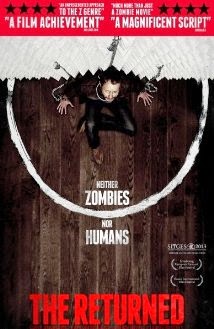 The Returned (2013) is a Canadian horror movie that puts a new twist on the zombie genre while still sticking to the same themes about selfish human behavior during a crisis. It doesn't star anyone I recognized, so I didn't know what to expect from the characters.

This movie takes place in the aftermath of a zombie holocaust where a cure was actually found that can keep the zombie conversion at bay. The only problem is that cure is quickly running out and scientists are scrambling to create a synthetic version. For those infected, finding the medicine they need creates a cutthroat level of demand because once you go off them, there's no turning back. This story follows a man struggling to keep from turning into a zombie while his doctor wife tries to help him.

I liked the original setting of this story but it's not your typical zombie movie in that there isn't much action. In fact, it only shows a few zombies. There were some interesting plot elements like people protesting for and against the rights of the infected, the way people are ostracized like AIDS patients, and so on. I will give this extra credit for being original, though the story itself could have used a little more excitement.

If you like zombie movies and are tired of all the crappy cheap knock-offs, this one might be worth your time. It's very low key but still works on some level even though I didn't care for the way it ended.