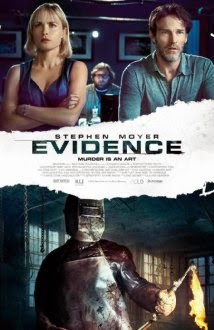 Evidence (2013) stars Stephen Moyer (vampire Bill from True Blood) as a crime scene investigator who must go through a bunch of video footage in the aftermath of a mass murder. It's a new take on the "found footage" style of film making.

The story here involves a bunch of people on a bus trip who go off road to pick up a passenger and get into a wreck that flips their bus. They all have to hike out to this remote set of buildings that may have been some kind of garage at one time. As night falls, the group realizes they are not alone when a crazed killer with a welding mask and blow torch starts taking them out one at a time.

Moyer's character and some fellow detectives must then go through the footage found on individual cell phone videos as well as some handheld video camera to piece together what happened and try to determine if there were any survivors. He's not sure if the killer was a fellow passenger or someone else. Because there were multiple cameras, you get to see some of the same events from different perspectives so there are some twists that help keep things interesting.

Overall, I liked this movie even though it was a bit far fetched. It tries to mix genres in such a way that it's a mystery as well as a slasher flick. I thought some of the characters added an unnecessary amount of drama that, in hindsight, didn't make much sense. It still had enough originality to make it worth checking out, though I didn't find it to be all that scary.