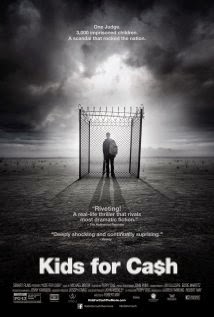 Kids for Cash is an infuriating documentary about a crooked judge who was getting kickbacks from a privately owned for-profit juvenile detention center that he helped to create with some business partners. This judge would put kids away from months or even years for the most trivial offenses because he got paid for each one he sent up. He ruined hundreds of lives, pocketed a couple of million dollars doing so, then on ton top of all that he didn't even declare the extra income so they got him for tax evasion, too.

What makes this documentary worth seeing is that the judge actually volunteered to appear in it and try to tell his side of the story. This was a guy who got re-elected on platforms of zero tolerance and the harshest of penalties who then goes on camera and hopes for some leniency and admits he made a mistake. He also thinks he did a lot of those kids a favor. Watching him try to justify his actions will make you wish you can punch him right through your screen.

No doubt this film will make you angry, but it's worth seeing because it demonstrates what can happen when people take a hardline approach to things. It also interviews some of the kids and their parents so it presents all sides fairly and equally. I'm glad this guy got busted, but it took several years and lots of destroyed futures before it happened.