A Night in Old Mexico 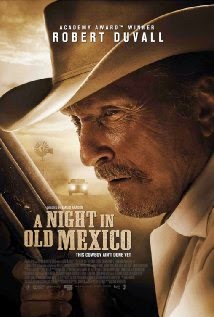 A Night in Old Mexico stars Robert Duvall as a widowed man who is about to lose his family ranch to the bank and he's on the verge of suicide. When his grandson shows up out of the blue, the two decide to head down into Mexico for a night of "singing, dancing, and women" as a way of casting off their problems.

Meanwhile, a drug deal in town goes bad and two drifters wind up hitchhiking along with Duvall and grandson. Some things get more complicated when a Mexican hitman stars tailing them around town, and before long the two cowboys don't realize how much trouble they are in.

Throw in a beautiful singer they picked up from a bar, a mysterious drug cartel guy who wants his loot back, plus lots of cold cervezas, and you get a recipe for one wild night.

It's hard to believe Robert Duvall is 80+ years old because he sure doesn't act like it in this movie. I enjoyed this one. It's from the same screenwriter as Legends of the Fall and The Perfect Storm.
Posted by Bill F. at 3:08 PM