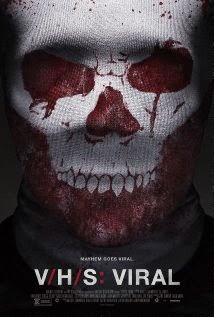 The first two V/H/S movies were wonderful collections of short horror stories built around a creepy premise where some folks find a cache of old VHS tapes depicting awful happenings. This third movie fails in comparison to everything that made the first two great. It's shorter than before and the individual stories just aren't as good.

One of the stories is about a small-time magician who winds up with a cursed cloak that grants him amazing powers but he has to feed it people to keep it up. That's it - a magician who kills people by draping his cloak over them while they sleep. In another that had more potential than it delivered, a man develops an inter-dimensional door in his house and then travels to the other side and finds a nightmarish world. It has some unfortunately awful and cheap-looking effects that make it laughable. Another story has a bunch of punk kids go down into Mexico to skateboard and they stumble across a Satanic ritual that results in an overlong series of attacks while they run away. The whole thing is encapsulated in a story about an van running amok in the city.

The premise of these films is that they fit into the "found footage" category of movie, but here there are numerous violations of this genre. Far too many cameras are used and there's too much editing, which defeats the whole purpose. This movie only offers a couple of tense moments whereas the two previous films were filled with them.

Don't bother with V/H/S: Viral even if you liked the first two movies in the series. It really doesn't have anything that stands out as being worth your time.