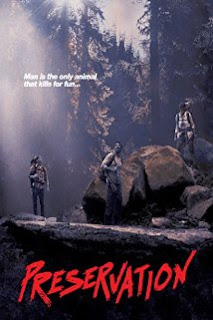 Preservation may be one of the dumbest movies I have watched in a while. It's about two brothers and a girl (who randomly blurts out, "I'm a vegetarian" while deer hunting) who go on an outdoor trip and find themselves hunted by a small group of masked killers.

The premise here isn't anything new - people being chased through the woods by killers they can't see. There is one minor twist that helps makes things a little creepy, but it's certainly not enough to save the movie from it's own stupidity. The two brothers get into arguments based on random pieces of information that are thrown in just before the fighting starts, and I guess this added drama is to serve as filler while we wait for the bad guys to show up.

In one scene, a guy (Pablo Schrieber - aka "pornstache" from OITNB) actually gets the jump on one of the villains and beats him, then takes his gun. Instead of just finishing the job, our would-be hero turns his back to the knocked out bad guy and says, "I guess I'm gonna have to kill you now" while he reloads the gun. When he turns back around, the bad guy stabs him and takes the gun back. WTF? In another scene, a guy escapes a locked porto-potty by climbing out the top while somebody is beating on the door. Again, WTF?

This was a total waste of time.