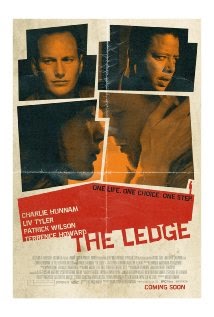 The Ledge (2011) stars Charlie Hunnam (Sons of Anarchy) and Liv Tyler as a doomed couple whose lives are threatened by an overbearing Christian played by Patrick Wilson. It was meant to be a mainstream atheist movie but fell flat due to poor characterization and a plot where the hero is as much of an antagonist as the villain.

The story involves a young couple (Wilson and Tyler) who live in the same building as two men - one straight and one gay - who are roommates. Charlie Hunnam plays the straight guy, and he immediately takes a liking to Tyler. One night the four of them get together for dinner and Wilson's character prays for their sinful lifestyle, which infuriates Hunnam since he's not even gay. He then romantically pursues Tyler as a way of rescuing her from her "bigoted" husband and when Wilson finds out, he begins to exact a horrific revenge plan on Hunnam.

What hurt this movie more than anything else is that it presents a ridiculous situation with a forced conclusion that I think was supposed to be preachy but came across as dumb. There was some shock value but that didn't save the movie. The story paints the characters as extreme forms of whatever they're meant to represent - the christian, the atheist, the homosexual, the former addict - and does so with such heavy handedness that they might as well be wearing t-shirts with the word "Allegory" printed on them. They could not have been more one dimensional.

In the end, I didn't care for The Ledge. It would have been a much better and more effective story if the characters had all been a little more reasonable in their behaviors. The same setup still could have played out but then it would have been more believable.