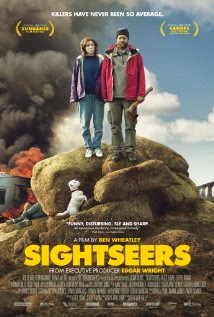 Sightseers (2012) is a dark comedy from the UK where a seemingly normal couple takes a vacation and leaves a bunch of murder victims behind them. It's like a lighthearted version of Natural Born Killers, minus all the overt symbolism.

The movie opens to the sound of an elderly woman distraught and moaning in pain because of the loss of her beloved pet dog. We later find out that the dog was accidentally killed by her daughter. That same daughter and her bearded boyfriend decide it's time to get away for a while, so they rent a small RV and head out on a cross country trip.

While on a tour bus at one of their first stops, another passenger deliberately litters and then flips off the boyfriend when he asks the litterbug to pick it up. After the tour is over, the young couple accidentally run over the same littering guy in the parking lot. He dies covered in blood beneath the RV tires. The girlfriend starts screaming, but her boyfriend looks on with a bit of a smirk, then they just drive off. Thus begins the killing spree.

For the rest of the movie, these two go from town to town looking for victims to take out for next to no reason. One guy gets his head bashed in at a national park, and in another scene a bride-to-be gets thrown off a bridge during her bachelorette party. It's even worse when they befriend a fellow traveler with a unique tent/camper of his own.

Although there were a couple of mildly humorous moments, this movie has an obvious mean streak about it. The deaths are bloody and vicious, and often coupled with music best suited for a horror movie. The main character's indifference toward is all is a bit unnerving, but maybe that was the point. Stories like this tend to work better when there is some kind of underlying theme going on, but this one is just about a boring couple who go around killing people for no good reason. It's kind of pointless.

In the end, I sort of liked Sightseers because it was so bizarre, but at the same time it lacked that extra something-something that would have made it really stick in your head.