The Girl in the Book 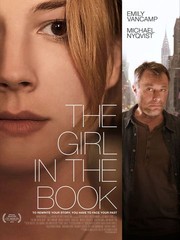 The Girl in the Book (2015) stars Emily Vancamp (Revenge) as a young woman who was molested by an older man during her teen years. That man, an author and family friend, used some of their inappropriate relationship experiences in his debut novel that went on to become a huge best seller.

Many years later, Vancamp is now working in the publishing industry when the publisher decides to do a re-release of her molester's book and she suddenly finds herself having to work with him. This causes the past to come flooding back and she realizes that her troubled childhood has always been the root of her relationship and personal problems. If she doesn't do something about it, she will forever live in the shadow of her past, and be nothing more than the dreaded girl in the book.

This story is told using a flashback narrative where it jumps back and forth between past and present. At first she's just an aspiring writer who wants some help from the big shot author, but things quickly turn bad when the man finds himself unable to resist putting his hands on her. This leads to some very disturbing, though brief, scenes.

While I did think the movie was interesting, it lacked a solid conclusion. It puts the focus mainly on Vancamp getting over a traumatic experience, but at no time does it ever mention pressing charges or outing the man for the pedophile that he was. Part of this has to do with her parents brushing things off as teenage fantasy, but on the other hand it also shows how hard it is sometimes for young victims to come forward. Either way, it was a fascinating premise but could have been further developed.