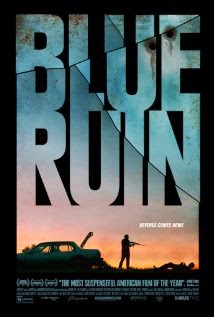 Blue Ruin is a slow burn kind of thriller about a young man who takes it upon himself to avenge his murdered family after the killers get out of prison. The title of the movie comes from the old blue car that the guy lives in.

What I liked most about this story is that the main character is just an average guy. He’s not some ex special forces, retired cop/hitman, trained killer. Instead, he’s just some poor kid whose life was ruined by crime who then is forced to take up arms in order to protect the rest of his family.

Macon Blair gives a great performance as the hapless lead character. He pulls off revenge killings with the awkwardness of a teenager boy’s first time with a girl, and his obvious vulnerability works on many levels. You feel bad for the guy and want him to succeed.

As an added bonus, one of the villains is played by Eve Plumb. You’ll recognize her face and then realize it’s the same actress who played the original Jan Brady on The Brady Bunch.